Loha Prasast Wat Rachanatda (literally translation – Metal Castle of Rachanatda Temple) which was just completed recently after more than a century of construction, is renown as the only metal castle (prasast) in Thailand and the only remain in the whole world (it seems that the other one in India was already destroyed). The building is 7-storey high with 37 dark color metal spires with very detailed decorations. It is rather different from most of Buddhism architecture we have here in Thailand. Besides the peculiar form of Loha Prasast, the interior space is by far more complex and interesting than the exterior metal feature which is usually known.

It was in January 1996 when Toyo Ito gave his first lecture in Bangkok.

Actually he was already in Bangkok in early 80s. Then he got the impression of people living ‘like a fish’ on the watery environment from the canal of Bangkok.

“I recall a boat ride I once took on a canal in Bangkok and the impression made on me by the sight of people living on the water’s edge. The people had adapted successfully to their watery environment……… The people dwell like fish, their bodies steeped in water……… The water flowing about those people was overwhelming, and the space that enveloped them was extraordinarily humid.”

First excursion of Ito-san in 1996 visit, therefore, was a boat ride in the canals he likes. 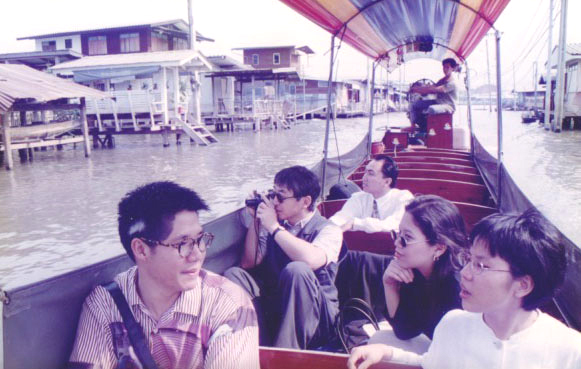 In the photo here, there are Kulapat Yantrasast, Sujin Osatarayakul, myself, Ito-san, and Pratran Teeratada

Water has great influences in our way of life since the beginning of time here in the region. Floods, flooding are nothing new. Just recently we forgot how to live with it.

Sumet Jumsai, a prominent architect of Thailand, writes a controversial book ‘Naga: Cultural Origins in Siam and West Pacific‘on how water shapes the so-called amphibian lives of people in the region. Although some parts of the book are slightly too fancy about water, it is rather inspiring.

Toyo Ito, a prominent architect, has made a very interesting observation on how we, people in Bangkok, live with water, from his boat ride trip:
“I recall a boat ride I once took on a canal in Bangkok and the impression made on me by the sight of people living on the water’s edge. The people had adapted successfully to their watery environment……… The people dwell like fish, their bodies steeped in water……… The water flowing about those people was overwhelming, and the space that enveloped them was extraordinarily humid.”

From 2011 floods, it seems that, really, we have forgotten completely how to “dwell” with water as Ito describes.

In 2010, floods damaged many cities in Thailand. Bangkok was somehow safe. However, we were quite alarming with the damage and danger caused by the water. Many architects and designers got together by TCDC discussing about floods and how designers could be part of the flood reliefs or preparations. As a result of the meeting, with Pim Sudhikam and Terdsak Techakijkachorn of Chulalongkorn University, we organized a summer workshop on “Watery Living” during June – August 2011, just right before floodings…

We are designers, surely not artists.
Compare to them (artists), what we do are closer to the utility side of things. However, we love art. We love the way art blows our minds and brings us to the territory where we cannot completely reason with our logic – it makes our hearts beating fast, our brains going dizzy….

Recently we have a chance to be closer to this mind-blowing territory we like. Thanks to Pinaree Sanpitak, one of the most prominent contemporary Thai artists who gave us a chance to collaborate with her on one of her trilogy exhibition, Body Borders: Anything Can Break at The Art Center, Chulalongkorn University, Bangkok. (She actually held her exhibition as 3 parts in 3 venues at the same time last August. The other two were at 100Tonson Gallery and H Gallery. You can say that not so many artists could achieve such a thing here in Thailand).

Last few months we have been very busy with several things: exhibitions, buildings, travelings. However, one of the most intensive and exciting among all is a competition we did together with 12 students of mine: New Taipei City Museum of Art International Design competition. Surprisingly, we won a Merit Award, 1 out of 10.

Singapore is a soulless place..

All modern urbanism ideologies which failed to work anywhere else in the world, became a reality here. The reality that is somehow like a dream – a soulless utopia dream.

The whole city is feeling as if it was a collective gigantic projects of architecture/urban design students – optimistic almost naive about how the (rest of the) world works – but it is real. It has been like this for decades.

Last weekend in Singapore, I began to notice something new after being there several times. Many brutal hyper-modern housings in the city center are transformed. The greyscale color of modernism scheme was replaced by super bright almost eye-sore colors.

People’s Park Complex from 1960s. According to wikipedia, the original finishing material was exposed raw concrete. But it was perhaps too brutally modern… The green and maroon colors are quite brutal in a different way though. But perhaps now, it is time when people speak a bit in this quiet country. 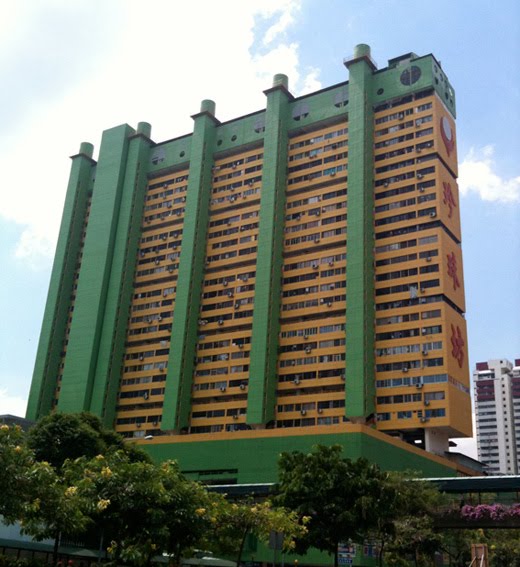 At the first encounter, I was extremely attracted as well as stunned by this image. As a just-graduated architect, I was not able to understand – the space seemed to fill fully with a cloud of steams, humid and a bit warm….. Looking at the image, I was feeling somehow a bit difficult of breathe, at the same time very drawn to get closer. Everything seemed to be rather surreal. 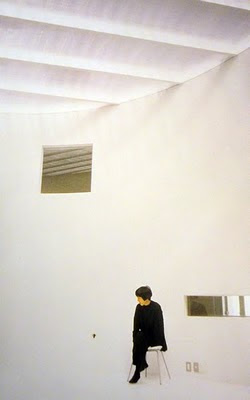 It happened in the summer of 1993, an exhibition space in Aoyama of Tokyo, I was at the prize ceremony of ‘Architecture of the Year’ by JIA (Japan Institute of Architects). The building, House in a Forest, was awarded the best architecture of the year.

On the way back from Ubon Rachathani after setting up HJS exhibition, on our van ride, we had a chance to stop by a small town called Khun Han (อ.ขุนหาญ) in Sri Saket Province (จ.ศรีษะเกษ) to see a temple we had been long to see for several years – Million Bottles Temple.

Most of the buildings of the temple are built mainly with recycled bottles.
According to one of the construction guys we met at the temple, it began more than 10 years ago that the head of the monks had this idea to use the bottles instead of bricks, because they had not much money to buy the common construction materials. The monks, therefore, asked for a donation of used bottles of all kinds – the main one was the beer bottles which was very fine tuned with the Thai’s drinking habit. -_-” 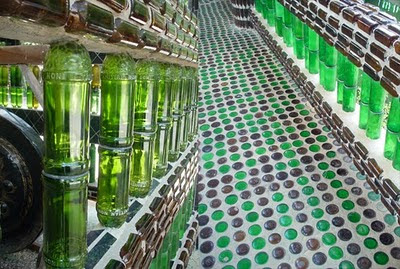 52 HJS exhibition @ The Capital of Lotus!

OKMD (The Office of Knowledge Management & Development) of Thailand was established with the intention to transform the country into a knowledge-based society. Several sub organizations were set up to follow ‘knowledge’ in different sections.TCDC (one of our beloved clients) is one among them. The latest move of OKMD is the project to transform boring public libraries in the province to become more active and accessible by people of all kinds. The project is literally called ‘Edible Knowledge Project’ (โครงการศูนย์ความรู้กินได้). They set up a first prototype of the library of the future at Ubon Rachathani, a most east province of the country, bordering with Laos.

We were asked to design a very small exhibition for the gallery of the library for the launch of the project on last 24th July. 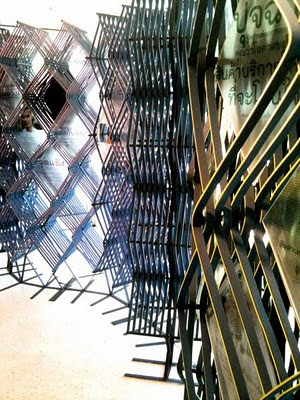 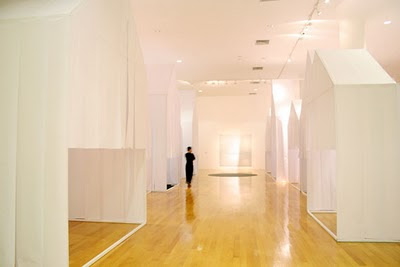 The exhibition, organized by Ministry of Culture and Bangkok University Creative Center (BUCC), aims to emphasize on cultural exchanges between Japan & Thailand via the works of Thai artists and designers which somehow are related to Japanese culture